Your browser is out of date.

2021 was a remarkable year for U.S. financial assets.

U.S. equities returned an eye-popping 28.7%, extending their gains since the trough of the global financial crisis to 812%—an outperformance of more than 500 percentage points relative to non-U.S. developed and emerging market equities.

Goldman Sachs’ Investment Strategy Group has consistently recommended clients stay invested in equities and strategically allocate a greater portion of their equity portfolios to U.S. stocks for the nearly 13 years that they have been writing these yearly Outlook reports. Yet such outsized returns have led clients and colleagues to ask whether we have finally reached a tipping point where the “stay invested” recommendation has reached the end of its shelf life and the time has arrived to underweight U.S. equities.

In Section I of this report, ISG explains why they believe the recommendation to stay invested remains valid. They focus on valuations, the earnings outlook given the global economic backdrop and the absence of what some have termed “froth” or “irrational exuberance” in U.S. equities based on financial market flows and portfolio positioning.

They compare and contrast the current financial market backdrop to that of the dot-com bubble in order to address a frequently and not unreasonably asked question: are we at the precipice of another major downdraft, like the 49% peak-to-trough drop in equities between March 2000 and October 2002?

They then turn to one- and five-year expected returns and our more opportunistic tactical tilts. Section I concludes with the key risks to this outlook, including the pandemic, inflation, tightening of monetary policy, recession and high-impact geopolitical flare-ups. 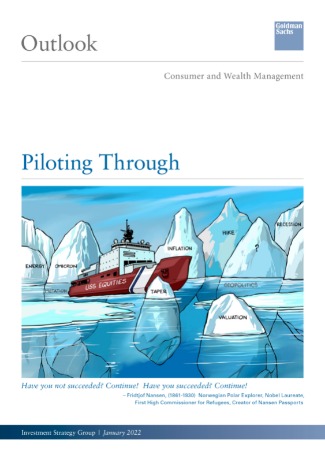 If you have Ayco as a company benefit, connect with your advisor to discuss this information further. For more insights from Goldman Sachs, visit goldmansachs.com.

No part of this material may be (i) copied, photocopied or duplicated in any form, by any means, or (ii) distributed to any person that is not an employee, officer, director, or authorized agent of the recipient, without Goldman Sachs’ prior written consent. This does not constitute an offer or solicitation with respect to the purchase or sale of any security in any jurisdiction in which such an offer or solicitation is not authorized or to any person to whom it would be unlawful to make such offer or solicitation. This material is a solicitation of derivatives business generally, only for the purposes of, and to the extent it would otherwise be subject to, §§ 1.71 and 23.605 of the U.S. Commodity Exchange Act.

Thinking of retiring soon? A critical decision on your pension payout could make all the difference.

6 ways to give your finances a boost before 2023

Financial Spotlight: An introduction to bonds

Financial Spotlight: An introduction to risk

Financial Spotlight: An introduction to stocks

Maximize your benefits this open enrollment

3 steps toward financial wellness in 5 minutes or less

Ways to increase or decrease your taxable income

What financial stressors can coaches help you with today?

Patrick Cantlay on his keys to success

Investing in stocks, explained in 6 questions

A guide to HSAs and FSAs

Retirement planning for all ages

What you need to know about tax deductions and credits

A quick guide to filing your tax return

Discover your tax personality and stress less this tax season

This tax season could be especially challenging, warns the IRS

Annual Enrollment: What to expect when talking with a coach

Four tweaks to make to your retirement plan in 2021

What COVID taught us about personal finance

How to rebuild credit

Saving vs investing: What's the difference?

What's ESG investing and how do I know if it's right for me?

From offer to closing—5 home buying steps to know

What is risk tolerance and how does it impact my portfolio?

Getting organized for tax season: What you need to know

Your guide to retirement accounts

Taxes: Refunds are not always your friend

How a financial plan can benefit your health

Use it, don't lose it: Emptying your FSA before year-end

Saving for college: A guide to education funding

Emergency fund: Why everyone needs a cash reserve

Lending a Hand: An informed buyer's guide to borrowing and refinancing

Making the right decisions to reduce your healthcare costs

Changing domicile during uncertain times: It may not be as easy as you think

An introduction to our Financial Wellness offering

Retirement: What to expect when talking with a coach

What you need to know about life insurance

How telecommuting from a different state could impact your taxes

A 4-minute guide to estate planning

Thinking about an HSA?

Investing in the COVID-19 era

Close to retirement? Prepare for the transition in an uncertain economy

Ayco FAQs during the COVID-19 crisis

Speaking with a coach during the COVID-19 crisis

Time away from work during the COVID-19 crisis: Does it impact your finances?

Creating a budget for uncertain times

Six ways to make working from home work for you

Household employees and employment taxes: Are you responsible?

The SECURE Act's impact on spouses and designated beneficiaries

Top five blogs of 2019 for individuals

How can I protect my privacy in real estate transactions?

Long-term care insurance: What you need to know

Top three reasons to get a Health Savings Account (HSA)

Extra cash? Some ideas to consider

Do you have a withholding mismatch?

How to avoid phishing and identity theft during tax season

The top five tax changes for 2018: What you need to know

Avenues for preparing your taxes

Getting organized for 2018 taxes: What you need to know

Top three reasons to get an HSA

Using tax losses as a tax strategy: A primer

The Tax Cuts and Jobs Act: The top 10 things you need to know

A hurricane season guide to protecting your family and finances

Retirement planning at any age

Charitable giving by the letter

Kids and college–making the right choice

Financial considerations for the expanding family

A guide to paying down your college debt

What cryptocurrencies are and what you should know

Combining finances with your partner